Now reading: What Happens to Your Brain When You Sleep?
Share
PrevNext

What Happens to Your Brain When You Sleep?

Is sleep really the cousin of death? Or an essential part of life?

It’s easy to ask: “Why sleep?” But we can also turn the question on its head: “Why wake?” We need to be awake, among other reasons, to find and eat food, drink water, escape danger, reproduce, and exercise. But we need sleep to restore our immune system, defend against cancer, consolidate memory, and drain our brain of toxins. Most adults need seven to nine hours of sleep to be healthy. If you’re not getting that amount, then it’s worth considering whether those extra wakeful hours are really more important than your health.

But what is sleep? Sleep is a natural brain state that reoccurs daily, during which our awareness and responsiveness to sights and sounds from the environment fade away. But sleep is different from general anesthesia, which induces a complete loss of awareness when administered correctly. Though anesthesiologists are said to put patients “to sleep” before surgery, patients often report having no sense of how much time has passed while they were put under. Furthermore, sleep is punctured with regular periods of conscious awareness known as rapid eye movement (REM) sleep.

Sleep can be divided up into two periods: REM sleep and non-REM (NREM) sleep. REM sleep is strongly associated with dreaming. However, we now know that most awakenings from NREM sleep are also accompanied by reports of dreams. NREM sleep consists of four stages of progressively deeper sleep. At each stage, neurons increase their coordination—known as synchronization—resulting in very high amplitude, slow frequency brain waves that can be recorded from the scalp using a technique called EEG. As can be seen in the stairstep-like plot of a hypnogram, the cycle then sweeps back, with the synchronization between neurons loosening until the brain reaches REM sleep. 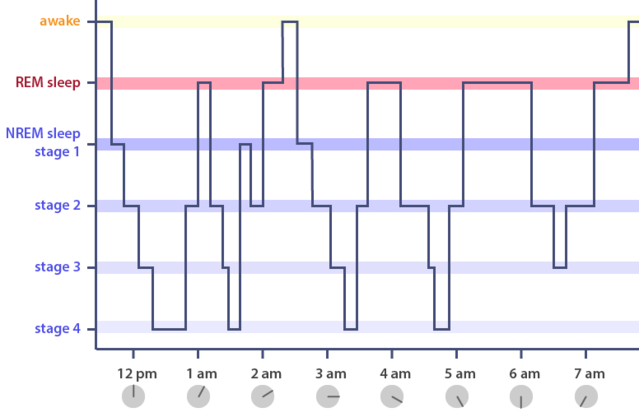 Hypnogram showing stages of cycles of sleep throughout the night.
Source: Illustration by Michal Roessler (Knowing Neurons) and adapted from Scholarpedia (McCarley and Sinton, 2008).

During REM sleep, the brain hallucinates (i.e., dreams) in a paralyzed body, and the EEG activity recorded from the scalp resembles that seen during wakefulness. Atonia, or a complete loss of muscle tone, prevents us from acting our dreams and injuring ourselves during sleep. When atonia and REM sleep do not align, parasomnias or disorders of sleep and behavior often result. For instance, damage to the brainstem circuits that regulate atonia may cause REM sleep behavior disorder, a sleep disorder in which individuals act out their dreams, sometimes resulting in accidental harm to themselves or others. (Although REM sleep behavior disorder may sound like sleepwalking, it is actually a separate parasomnia.) Sleep paralysis, just the opposite condition, occurs when atonia overlaps with wakefulness, leaving one to awaken in bed, briefly unable to move or talk. Sleep paralysis is not a parasomnia per se—it occurs as part of other parasomnias, but also in many healthy individuals.

Staying awake is hard work. Wakefulness is not the brain’s default state, but rather the exceptional result of the brainstem prodding the cortex with a cocktail of neurotransmitters, including glutamate, acetylcholine, serotonin, and norepinephrine. These neurotransmitters are delivered to the cortex from the brainstem’s ascending activating system (AAS). The AAS is a collection of nuclei, or clusters of cell bodies, with exotic names such as locus coeruleus and raphe nucleus. Specifically, these nuclei broadly project particular neurotransmitters to targets in the cerebral cortex. Many of these projections also reach the thalamus, two walnut-sized lobes that serve as the pearly gates to the cortex. Cutting projections from these nuclei plunge the brain into an irreversible slumber.

What turns off the AAS when we sleep? Adenosine, the same molecule that is blocked by caffeine in tea or coffee, accumulates in the brain during wakefulness and blocks components of the AAS, making us feel sleepy. But adenosine is not the only factor that regulates sleep. The suprachiasmatic nucleus is a region of the hypothalamus, a regulatory center of the brain, that sits above the optic chiasm, the place where the optic nerves cross from each eye. Neurons in the suprachiasmatic nucleus receive input from cells in the retina of the eye that tell your brain when it’s light outside. This allows your brain to synchronize sleep with nighttime but can be easily fooled be artificial light, such as the light from your smartphone before you go to sleep. Another part of the hypothalamus, the tuberomammillary nucleus, appears to regulate wakefulness using the neurotransmitter histamine. This is why antihistamine drugs such as allergy medications often feature drowsiness as a side effect.

Your brain works hard to give you rest and restoration each night. Unfortunately, mottos such as “I’ll sleep when I’m dead” hasten Alzheimer’s and other deadly diseases by allowing toxic chemicals to accumulate in the brain. Contrary to popular wisdom, sleep is not the cousin of death, but an essential part of life.

Why Codependents Stay In Damaging Relationships