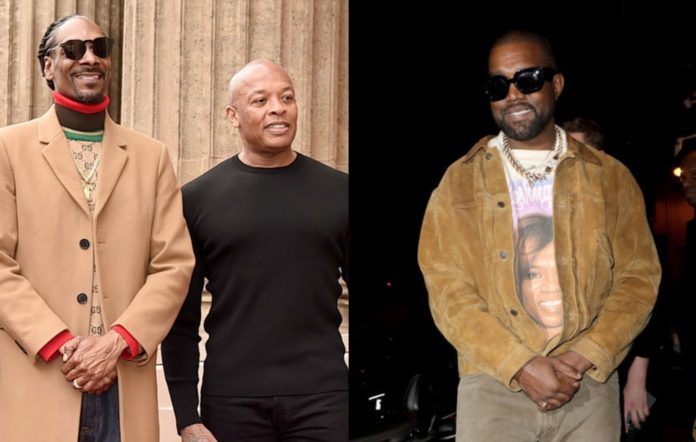 Snoop Dogg has shared a secretly filmed clip of Dr. Dre and Kanye West working in the studio together.

In the “exclusive footage,” Snoop appears to be sat in the back of a studio while Dre and West are working on music.

The video then pans to show West and Dre working near the studio’s mixing console.

It comes after West teased last year that he and Dre were working on a sequel to his ‘Jesus Is King’ album. “Ye and Dre Jesus is King Part II coming soon,” the hip-hop titan tweeted, sharing a picture of them both in the studio.

Whether the pair were working on music for ‘Jesus Is King Part II’ has not been confirmed, but West did tweet that they were “finishing [their] first project,” hash tagging it “#WESTDAYEVER.”

“IM SORRY DOCTOR DRE I SPILT THESE THREE DROPS OF ORANGE JUICE MIXED WITH UUUUUUM WHILE WE WERE FINISHING OUR FIRST PROJECT#WESTDAYEVER,” he tweeted.

Both West and Dre have worked with other huge names in hip-hop including Jay-Z and Nas but have not worked together so closely before.

Ye has made his admiration clear for Dre in the past. In a 2010 Rolling Stone article he recalled how overwhelmed he was when he met the Californian rapper/producer.

“I first met Dre in December of 2003. He asked me to produce a track for The Game,” West said. “At first I was star-struck, but within 30 minutes I was begging him to mix my next album. He’s the definition of a true talent: Dre feels like God placed him here to make music, and no matter what forces are aligned against him, he always ends up on the mountaintop.”

Meanwhile, Gap has partnered with Kanye West and Yeezy – his fashion company – to create a new clothing line.

The new line, which is called Yeezy Gap, will be introduced in the first half of 2021, both companies confirmed Friday (June 26).