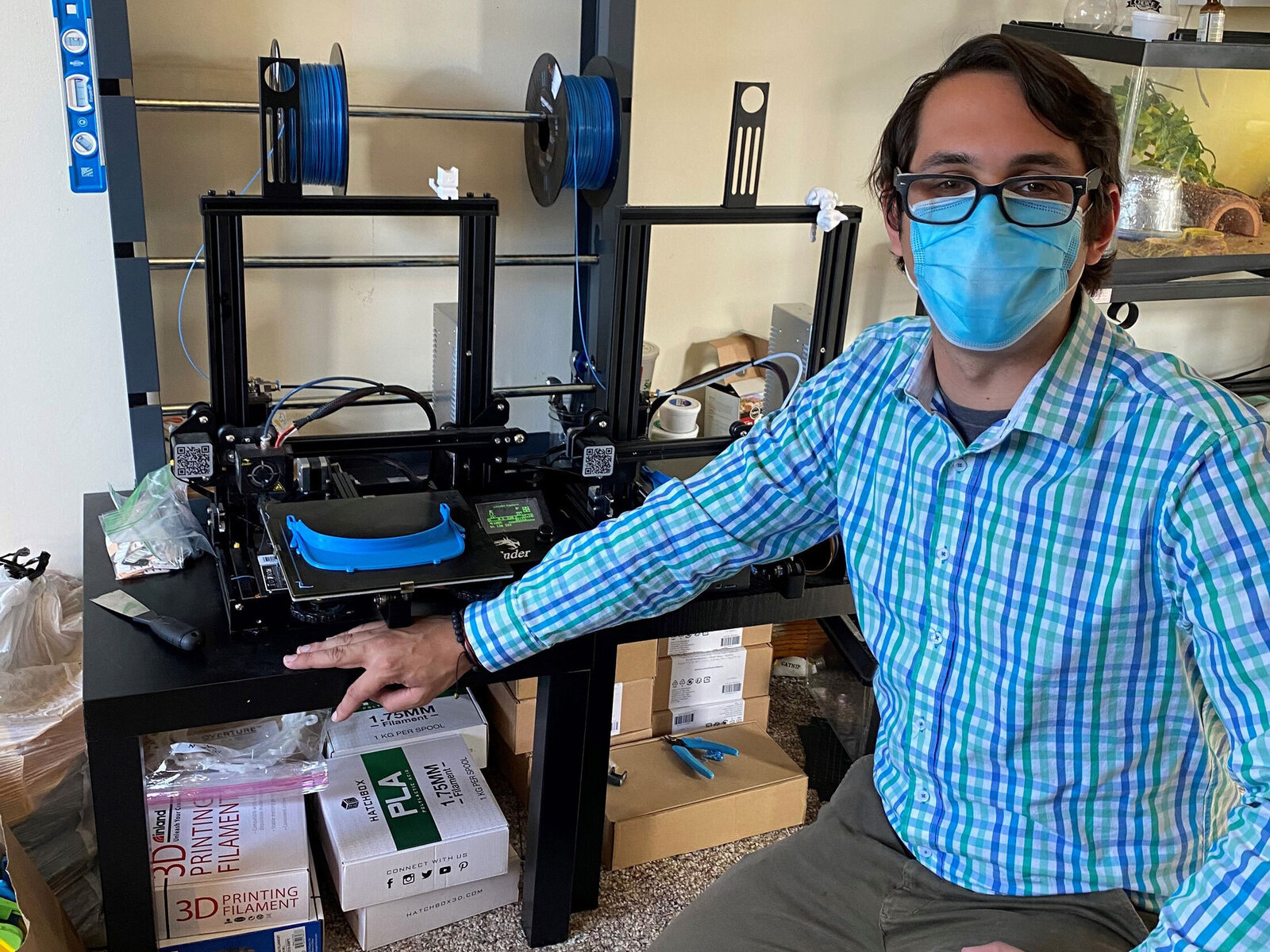 Jacob Ezzo, a chorus teacher from South Orange Middle School in New Jersey, has helped spearhead an effort to make face shields for those working on the front lines of the coronavirus pandemic. Anastasia Tsioulcas/NPR

Face shields are critical gear for those on the front line of the ongoing coronavirus crisis. But like other pieces of PPE, they often still aren't available. But one volunteer group, using 3D printers at home, has made nearly 40,000 NIH-approved face shields for health care workers and first responders — from New Jersey to the Navajo Nation.

Jacob Ezzo is a beloved middle school chorus teacher in South Orange, N.J., who's earned commendations for his ability to get kids to love music.

In mid-March, Ezzo school was suspended as the coronavirus crisis set in. "We went home Friday on that half day thinking it was just going to be a 72-hour, use up our snow days, clean the school and come back" situation, he says.

Ezzo had bought himself a 3D printer a few months earlier, and he'd seen some blueprints online for how to make face shields. He figured he'd experiment over the long weekend. "It was on Sunday that I printed it off, my first one, because I was like, 'Oh, I have Monday off. I'll do something interesting,' " he laughs.

The teacher thought this would just be a short-term project to help out. "When we all started this," he says, "we thought, 'We're acting as a stopgap. We're plugging a small hole in the dam until the big industries come online and take over.' And they just never came."

Soon, Ezzo had connected with dozens of other volunteers — not just in his community, but across New Jersey. They call themselves the SOMA New Jersey 3D Printers Alliance; SOMA stands for the neighboring towns of South Orange and Maplewood. (The sibling communities are suburbs of New York City and adjacent to the city of Newark. Their county, Essex, is among the hardest hit in New Jersey — a national hotspot for the coronavirus.)

Just as Ezzo encourages his students to sing, he helped connect some of them with the volunteer effort. Zubin Kremer Guha, 18, is a high school senior from South Orange who attends Columbia High School. He's also one of Ezzo's former students.

"One of the biggest things I do is the robotics club," Kremer Guha explains. "That's actually how I first got into 3D printing, to make parts for those robots. I saw the opportunity where I could help people out in this hard time. So I thought, if I can, why not?" 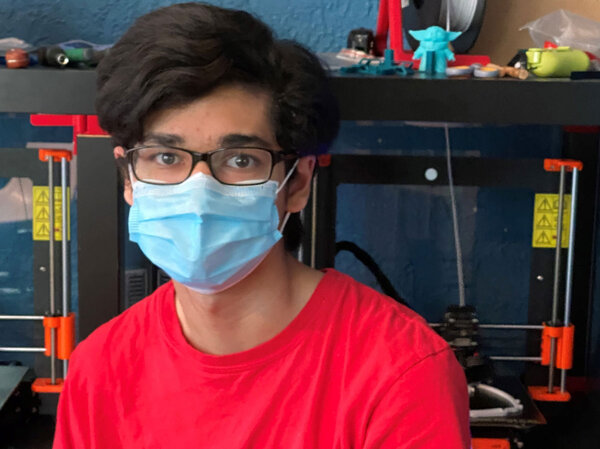 Zubin Kremer Guha, a senior at Columbia High School in Maplewood, N.J., has made more than 3,000 face shields as part of the SOMA NJ 3D Printers' Alliance. Anastasia Tsioulcas/NPR

This student has become the most prolific printer in the group. So far, he's
printed more than 3,000 face shields at his home, on several machines that hum away 24 hours a day. He's also one of the lead coordinators on the project — all while he's finishing up his senior year and taking his AP exams.

His mom, Devyani Guha, who is also another group coordinator, says that he is going through an astonishing amount of plastic filament to print the shields.

"Zubin actually did some personal fundraising and we stockpiled what at that time seemed like a huge number of us. We got 26 spools and we thought, 'Oh my God, we are set.'"

They weren't. They've since bought about 300 kilos of filament, and their house has been pretty much taken over by spools and printers.

Another organizer is Nino Badridze, a psychology professor living in Maplewood. She says that she wanted to be able to be proud of what she did to serve others during the pandemic. "In 10, 20, 30, 40 years' time," she observes, "we are all going to think back to these times and think about how we walked through them. And sitting at home and baking bread was not as gratifying, although I do that a lot too!"

So far, the group has delivered more than 39,000 face shields, including to more than three dozen hospitals. Frances Jacobus-Parker is another volunteer coordinator; she's an art historian in Princeton. She says needs are shifting — away from hospitals and more towards long-term care facilities, like nursing homes.

"Everybody recognizes this is a crazy way to mass produce anything," Jacobus-Parker observes. "This is not how how these how medical supplies sort of ideally should be being produced. They should be produced in large-scale manufacturing facilities. But it's been a remarkably effective way to get PPE into the hands of people who need it."

The group has already been hailed by N.J. Gov. Phil Murphy — and Jacob Ezzo says that the volunteers will keep on making the face shields, for as long as they're needed.

"Every step of the way," Ezzo says, "there is a whole team of people that have stepped up selflessly just to help out, which I think has been just absolutely incredible. And we've been able to take whoever has shown up wanting and willing to help, whether they are a grandparent or 7 years old."

The littlest ones are helping to assemble the shields — so the older volunteers can ship them, or drive them to the people who need them.

Stormzy to donate £10m to black British causes over 10 years

Music industry to nearly double in value by the end of the decade, Goldman Sachs says