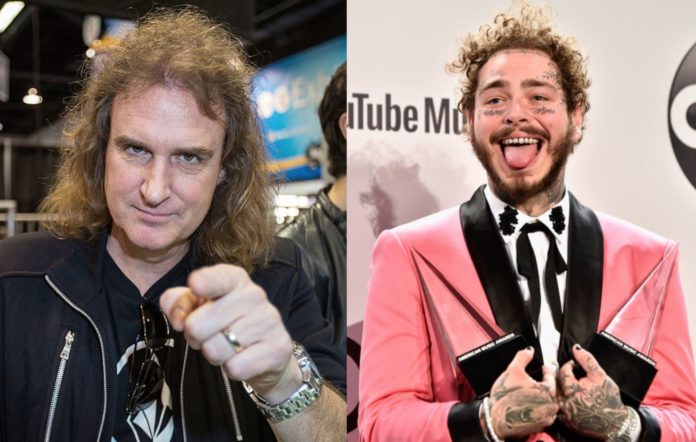 Megadeth bassist David Ellefson has shared a metal cover version of Post Malone‘s ‘Over Now’ – listen to it below.

Set to land on the debut album from Ellefson’s self-titled solo band, which is due out in October, the orignal version of ‘Over Now’ featured on Posty’s 2018 album ‘beerbongs & bentleys’, and was co-written by Mötley Crüe‘s Tommy Lee.

“We’re all fans of Posty, and he’s also been a huge fan of Megadeth and all things metal,” Ellefson said in a press release. “The old adage used to be that if you could strip a song down to just an acoustic guitar and a vocal, you probably had a great song.

“But times have changed now, that if you can take a song from another genre, and seamlessly transform it to a completely different genre, it just proves what a great song it really is.”

Listen to Ellefson’s cover of ‘Over Now’ below:

Taking place in aid of The United Nations Foundation’s COVID-19 Solidarity Response Fund for The World Health Organization (WHO), the set saw Post joined by Travis Barker on drums, Brian Lee on bass and Nick Mac on guitar.

Among the covers were versions of ‘Lounge Act’, ‘On A Plain’ and ‘Heart-Shaped Box’. Post also paid tribute to Kurt Cobain, wearing a flowery dress throughout the set.

Meanwhile, a collaboration between Post Malone and Lil Uzi Vert could be on the way, according to Posty’s manager.

Dre London uploaded an old clip of Posty and Lil Uzi Vert hanging out backstage at a concert in 2015 to Instagram. In the caption, he teased a potential collaboration between the two on the new album.

“I remember these two hustling from ground zero in 2015 To see the levels they’ve brought it to is amazing!!” he wrote. “I know we got a lot of surprises on this next project, Maybe a Posty Vert idk I just wanted to post this clip from memory lane!!”

Billie Eilish has been writing new music in quarantine: “We got some stuff coming”